A lot of interesting things await you in the 0.9.10 update. Most of the things we’ve added to the game this time were requested by our community. In this post, we’ll briefly tell you about the latest game changes. Click on a specific topic to learn more. Here we go!

You’ve been asking for them. You’ve been waiting for them. And they’re finally here! Based on the numerous requests of fans of the previous parts of the game, as well as fans of military strategies in general, we’ve introduced the ability to move the artillery. You will now be able to control mobile howitzers, anti-tank guns and AA guns. They are available in the game as separate units. You can add them to your assault group or use them as reinforcements.
If the crew using the fortification is killed, it can be occupied by either your forces or the enemy.
Mobile artillery can be entrenched. In this position, it loses the ability to move in exchange for increased defense of the gun and the crew. Bear in mind that the entrenched artillery has a limited barrel rotation range, so use this ability wisely to defeat the enemy.
Mobile artillery has low maneuverability, but, similar to infantry, units of this type are disguised when they enter forested areas.

Animation of shooting in many mobile fortifications is not in the final quality.

You receive points differently in PvP mode. Points are awarded depending on the damage ratio and time spent in battle. Thus, you may receive almost nothing if your opponent is disconnected from the game or if you don’t perform any actions. Be more active! :)

Note that you will not receive research points for battles arranged through the lobby, including battles against our AI, Boris.

Many of you who have already advanced to the second and third eras want to fight in the eras you have already completed. You will now have this opportunity!
Previously, when you entered a new era your base moved with you and you couldn’t return to the previous era. You will now have a base at each phase of the war. You’ll be able to switch between them by changing the era. Each base will need to be equipped and defended, as the success of its defense will affect your rating. Your forces will be restricted to the era you are in and, as a consequence, you will not be able to assign a unit from the third era to protect a base from the second.
And so, you will be able to play in Assault and Skirmish modes in any of your available eras. 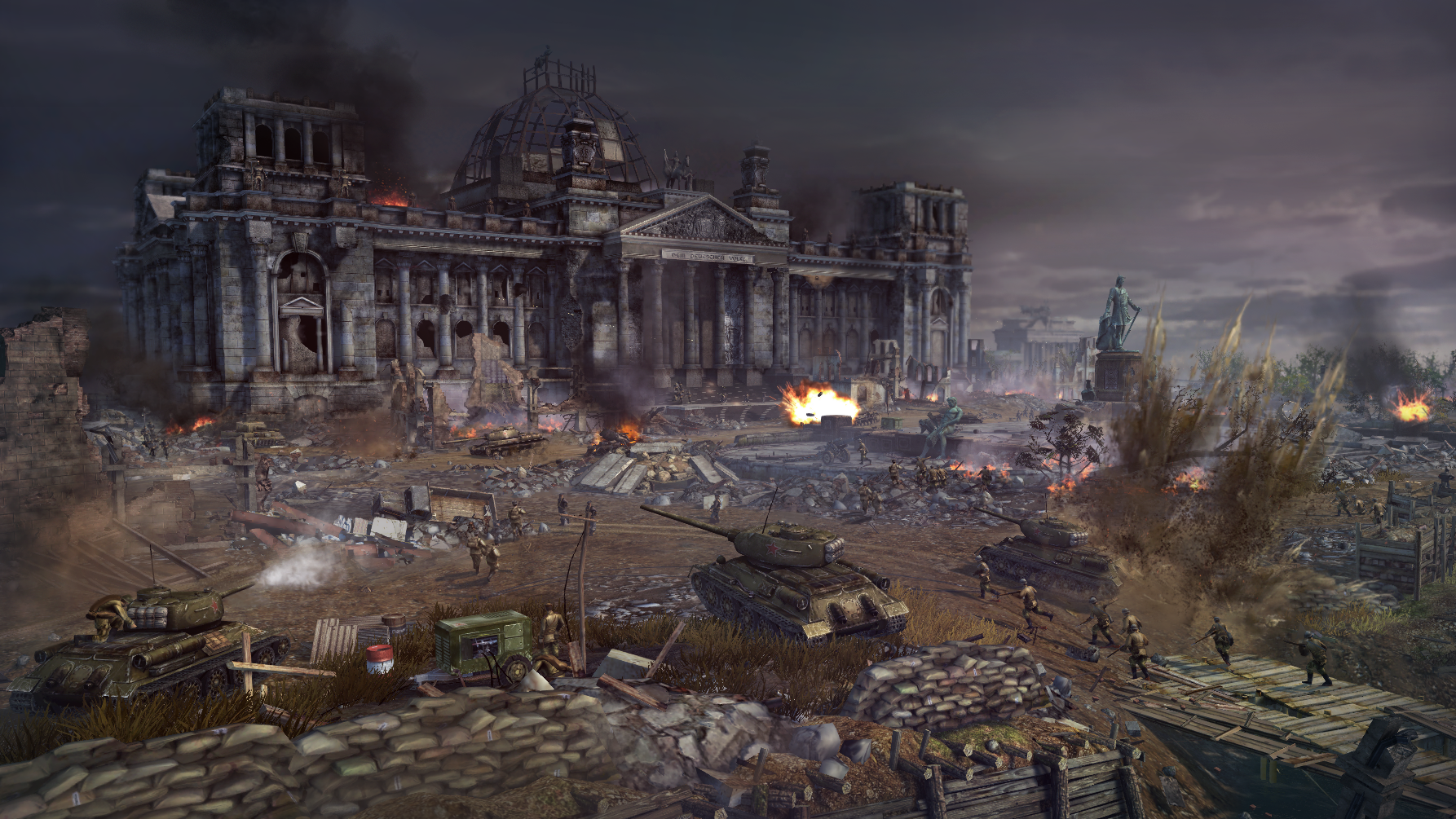 The mission takes place in April 1945. Soviet troops are approaching Berlin from the east, encircling the city. According to intelligence reports, to the west of Berlin a large grouping of troops is trying to break free of the encirclement.

Your mission is to locate and attack the group of German troops ready to break through to the west, where, according to intelligence, there are Nazi criminals. You need to provoke them into attack, keep them busy, and hold the western area until the allied forces close the encirclement from the north and south.

While working on the game, we came to the decision that Deluxe edition owners should have an additional mission for each faction. You have probably already managed to complete one such mission for Germany - Dora. V-2 is a deluxe mission for the USSR.
According to our intelligence, the Germans are testing the latest V-2 rockets at the firing area near Debits. We must capture one of these rockets at any cost!

You will be fighting in the Malaysian jungle in a picturesque locale, where many waterfalls roar. The control points on this map are located in a peaceful village, in rice fields, and near an ancient temple. Combat operations were conducted in this area, and so part of the land has been mercilessly charred. But this doesn’t overshadow the jungle’s natural beauty. A feature of the map’s landscape is the abundance of areas covered by water, where passage through it will take longer than through land.

As you already know, there are several types of missions in the game. We’ve slightly adjusted the look of icons on the globe, and we hope that you will like these changes.

There are two types of missions in the game.

Known problems:
1. Some images added in this update will be changed or improved.